We are all living in an era of endless distraction and constant input. Channeling a sense of calm, Marcus Cederberg translates society´s intrinsic need for a slower pace into minimalist photographs. The Swedish artists outlook on life is thereby converted into colors, contrasts and negative space. His work has graced the walls of galleries in USA, India, Hong-Kong, Germany and Stockholm, and his ”less is more” message echoes through the online world from his Instagram where he has become a minimalistic influencer with 100.000 followers.

“Say more by showing less”: such is the mantra of Marcus Cederberg as he roams the streets of Sweden, Dubai and beyond. Capturing everything from window-lined skyscrapers to lone pedestrian crossings as viewed from above, the Swedish photographer has a real talent for detecting aesthetically pleasing details in both urban and natural environments.

Striking in its simplicity, Marcus Cederberg’s work immediately grabs the onlooker’s attention. We met with him to delve into his musings on the art of minimalist photography.

When Marcus first started Instagramming back in 2014 (@marcuscederberg), he would never have guessed how much success it would bring him; so much so, in fact, that he would go on to become a widely acclaimed photographer. As he recalls, it all happened by chance:

“I had no intention of becoming an artist, but I realised that many people liked the more minimalistic pictures I posted and they started asking me where they could buy them. It all really set off when I was selected as a suggested user by Instagram and thousands of people began to follow me”.

Gaining such recognition online only made Marcus’s confidence as a photographer grow. It also led to him hosting his first solo exhibition in his hometown of Örebro, as well as being scouted by @fotografiska, Stockholm’s Museum of Photography.

Contrary to what you would expect, what most stands out in Marcus’s work is its overtly minimalist nature. As the talented photographer explains, the maximisation of empty space allows him to foreground certain details: “With my images I try not only to make the viewer feel curious, but I also to tell a little story. And doing that through negative space can be a real challenge sometimes!”.

An example of how his work awakens our curiosity can be found in the aerial shot ‘Yeti’. By opting for a bird’s eye view, Marcus restricts our vision to the mere footsteps and shadow of his subject. Without anything that reveals the latter’s identity, origins or destination, we’re left to our own imagination to put together the pieces. As a result, we become active agents in the attribution of meaning to this photograph.

Despite giving the viewer symbolic agency, Marcus rarely features humans physically in his work. “In my next life, I’d love to be able to shoot portraits, but for now I concentrate on using human silhouettes for detail, as a way to disrupt patterns or areas of negative space.” This aesthetic disruption certainly makes us look twice. We can’t help but search in our minds for a deeper meaning to all these staircases, walls, windows and more…

Another passion of Marcus’s is photographing architecture it in all its grandeur. “Modern architecture influences my work a great deal. I like to capture its simplicity and minimalism”. When asked about his favourite architectural movement, Marcus told us: “I like modern architecture the most, from the second half of the 20th century onwards. I love the likes of Santiago Calatrava and Zaha Hadid, as well as the whole Bauhaus style—it’s perfect for my kind of photography! As a person who loves hunting for shadows and shapes, symmetrical patterns and large negative spaces, architecture is the perfect ground for finding what I’m looking for”.

We can see this love for architectural forms in ‘Tower of Power’, ‘Walker in the Sky’ and ‘Mexican roof’, in which Marcus achieves near-perfect symmetry by shooting his photographs according to the vertical, horizontal and diagonal lines of each building’s respective structure. In ‘Diamond’, he takes this one step further by zooming in on the repetition of structural lines as they intersect and reflect off each other—arguably reminiscent of a hall of mirrors.

As for his creative process, Marcus is by no means dogmatic. “Sometimes I plan a shot in advance, arriving in good time so that I can check out the shadows and colours… But more often than not, I just stumble upon something interesting and take photos spontaneously”. And this is what he enjoys the most: “that moment when I spot an object to shoot and see the end result in my mind, knowing that it will be a great picture”.

A sense of movement and journey, from smaller daily journeys to the more philosophical journey of life. 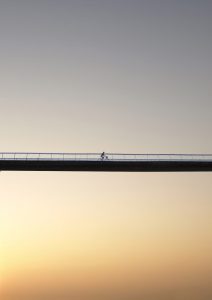 To illustrate his approach, Marcus makes reference to his shot ‘Going Home’. Originally, he explains, he chose to photograph this bridge because of the expansive empty space surrounding it—ideal for a minimalist aesthetic. Add the passing cyclist to the mix and the result is a stunning image that gets the onlooker’s mind racing. Is the bridge really so high? Where’s the cyclist going? Is he or she on their way home, to the office, to visit a lover…?

“With this image, I wanted to convey a sense of movement and travel, from our smaller daily journeys to the more philosophical journey of life. I added in the sky to create a more dynamic picture—and it’s thanks to this that it became so popular! People love a gradient sky”. To this day, in fact, ‘Going Home’ remains one of Marcus’s most-loved prints: “I’ve received pictures of it hanging on walls all over the world, and following my takeover of the Swedish Photography Museum’s Instagram account back in 2017, it became one of the most liked pictures of the year.”.

We certainly understand why. ‘Going Home’ is a real showstopper.

Have you fallen under Marcus Cederberg’s spell? Then cast your eyes on more of his minimalist photography—it’ll leave you feeling enchanted, invigorated and inspired.

You can follow Marcus for more of his works on: